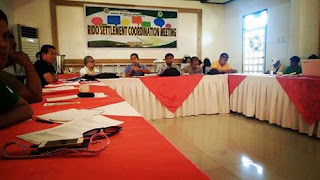 ARMM Operational Mechanism for Rido Settlement conducts its first quarter meeting to associate all initiatives in addressing rido issues in the region.


COTABATO CITY, December 28 - The composition of the ARMM Operational Mechanism for Rido Settlement was designed in response to the collective numbers of rido issues in the region by collaborating with all agencies and other concerned civil society organizations. The meeting aimed at conceptualizing its plan of actions in order to diminish these issues.


The first quarter meeting was held in Pagana Kutawato Native Restaurant this 28th day of December. It was attended by the members of the mechanism from the different line agencies of the region and other CSOs. It was spearheaded by the RRUC Chairman Romeo K. Sema. said Sema.


"The RRUC coordinating body is highly committed to intensify the monitoring mechanism of internal conflicts and the settlement of the existing rido (feuds) thru preventive measures and coordination with the different cluster systems in the region", said Sema. Besides, "the DILG is committed to strengthen the Lupong Tagapamayapa in all barangays in ARMM", he added.


Further, in a study conducted by Wilfredo Magno Torres III, an anthropologist working for The Asia Foundation as well as the director for research and extension of the Notre Dame of Jolo College in Sulu defined Rido as an intermittent outbursts characterized by a sporadic retaliatory violence between families and kinship groups as well as communities where government or central authority is weak and perceived lack of justice and security.


Notwithstanding, the Regional Reconciliation and Unification Commission as mandated through Muslim Mindanao Autonomous Act No. 25, seven of the local government code of ARMM under section 118, series of 1993 will serve as an advisory and coordinating body of the Regional Government on the resolution of feud-related in the ARMM.


Moreover, there are numerous agencies in the region even in local government units such as municipalities and barangays developed initiatives and mechanisms that address rido issues. In order to institutionalize these initiatives, the ARMM Operational Mechanism for Rido Settlement was created.