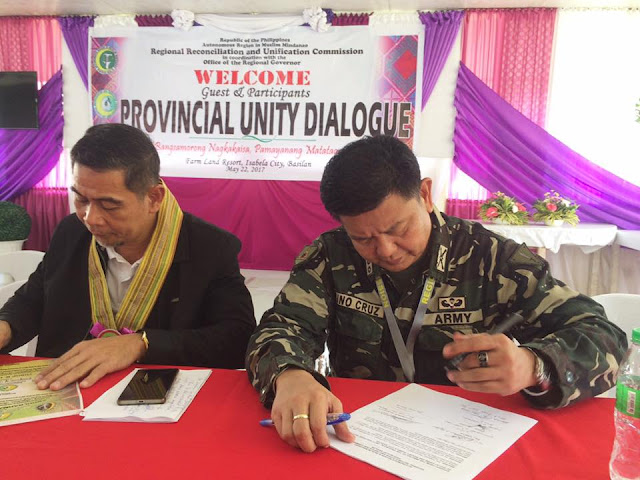 The Regional Reconciliation and Unification Commission of the Autonomous Region in Muslim Mindanao RRUC ARMM held Provincial Unity Dialogue on Monday, May 22, 2017 at Isabela City, Basilan.
The unity dialogue is one of the advocacies of the commission to support unity among Bangsamoro and other inhabitants to achieving lasting peace in Mindanao, said Romeo Sema, RRUC chairman.
It is anchored to the ARMM's advocacy for peace and development. Its main goal is to establish mechanism in the province to address rido issues, Sema added.
Because of the earnest will of the commission and other agencies to address rido issues in the province, an excerpt from the dialogue was signed to strongly recommend to Basilan Governor Jim Salliman the creation of mechanism for rido settlement.
Governor Salliman is very enthusiastic when it comes to peace issues. We cannot really achieve the true development without true and lasting peace, said Nixon Alonso representative from the Office of the Provincial Governor.
As a commitment, 104th brigade commander of 1st Infantry Division Sino Cruz enunciated to win back the trust of the public over law enforcers in able to bring peace in the community.
The dialogue was attended by different sectors from the local government unit (LGU), the youth, women, civil society organizations (CSO), Moro National Liberation Front (MNLF) as well as Moro Islamic Liberation Front (MILF) and line agencies such as Department of Labor and Employment (DOLE ARMM) and the Regional Darul' Ifta. (RRUC Communications Division)
sa Lunes, Mayo 22, 2017 Walang komento: 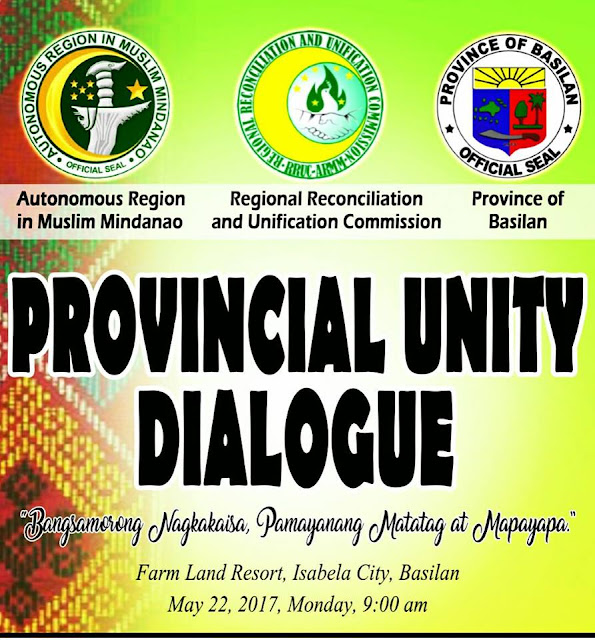 The Regional Reconciliation and Unification Commission of the Autonomous Region in Muslim Mindanao (RRUC ARMM) is set to conduct Unity Dialogue in the Province of Basilan bearing the theme “Bangsamorong Nagkakaisa, Pamayanang Matatag at Mapayapa” on May 22, 2017 at Farmland Resort and Convention, Isabela City.
RRUC Chairman Romeo K. Sema will spearhead the said dialogue in coordination with the Office of the Regional Governor and Office of the Provincial Governor (Basilan) to discuss mechanism in addressing rido and other internal conflicts that cause disunity among Bangsamoro.
Sema said the dialogue is one of the programs and advocacies of the commission channelled to the regional development plan in the promotion of peace and development in the ARMM.
In an interview with the RRUC Executive Director Abdulbasit R. Benito, he disclosed that ARMM Governor Mujiv S. Hataman will be attending the said dialogue as keynote speaker.
We are expecting more than one hundred participants coming from the different stakeholders including local government officials, security sector, religious leaders as well as MNLF and MILF, said Benito.
The ultimate objective of the dialogue is to set up coordination mechanism to proactively address the problem of rido in the province, Benito added.
The dialogue will also be attended by women, youth, academe, businessmen, civil society organizations (CSO) and other sectors. (RRUC Communications Division)
sa Martes, Mayo 16, 2017 Walang komento: 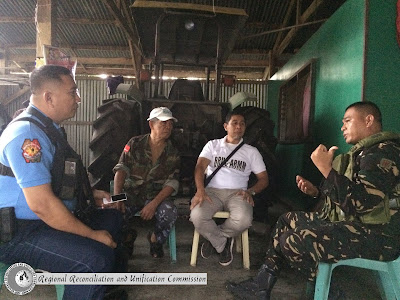 The Regional Reconciliation and Unification Commission of the Autonomous Region in Muslim Mindanao (RRUC-ARMM) coordinated with the Datu Odin Sinsuat Municipal Police Station and 19th Infantry Brigade, PA after tension continued between clashing clans on Wednesday, May 3, 2017.
RRUC Chairman Romeo K. Sema immediately coordinated with Police Chief Inspector AchmadAlibonga, PhD Crim., DPA and Brigade Commander CTC Crizaldo Fernandez, 19th Infantry Batallion after tension continued between Bansawan and Sepi families in Baguainged, Datu Odin Sinsuat, Maguindanao.
Brigade Commander Fernandez said the tension started to arise on April 28, 2017 and allegedly related to land dispute and drug trade issues. Because of the tension, thePNP and AFP visibility in the area was strengthened in order to reduce the swelling tension as they serve as the arbitrator.
As an intervention of the commission, RRUC-ARMM is planning to organize conflict management and dialogues between the two clashing parties in order to facilitate settlement in coordination with the PNP, AFP and other concerned agencies.
sa Biyernes, Mayo 05, 2017 Walang komento: 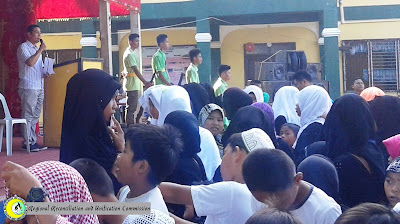 Regional Reconciliation and Unification Commission of the Autonomous Region in Muslim Mindanao (RRUC-ARMM) supported the City Musabaqah, a sports and literary competition,on Wednesday, May 3, 2017 held in Kutawato Institute of Technology Foundation Incorporated (KITFI) (KITFI).
The support from the commission was part of its program and advocacy which is the Islamic Values Transformation among the Bangsamoro youth.
The RRUC-ARMM is being spearheaded by the chairman Romeo K. Sema and the executive director Abdulbasit Rajamuda Benito.
Sema said the youth plays a vital role in the society in achieving the lasting peace among Bangsamoro people.
Benito gave emphasis that age is not a hindrance to Islamic literacy, and shared his efforts in continuing to learn Islamic values.
The activity was also supported by the city councillor Sukarno Sema. It was participated by the different Madrasah (Islamic institution) in the city and its neighbouring municipalities. 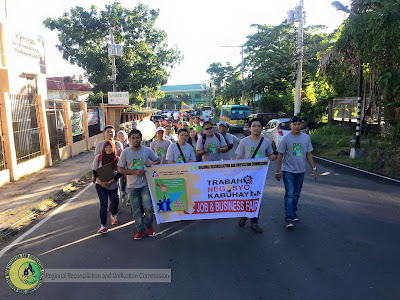