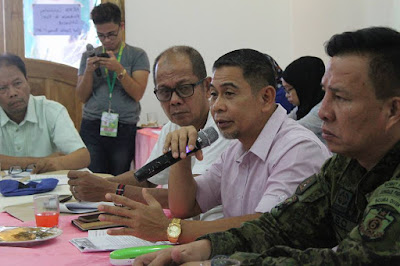 The ARMM Coordinating Mechanism for Rido Settlement chaired by the Regional Reconciliation and Unification Commission of the Autonomous Region in Muslim Mindanao convened its second quarter meeting on Thursday, July 6, 2017 at Pagana Kutawato Native Restaurant.
As discussed in the meeting, the RRUC is set to conduct unity dialogue in Maguindanao in order to gain support from the local executives such as the municipal mayors, Association of Barangay Chairmen (ABC) presidents, the religious leaders (ulama), member agencies of the mechanism and other concerned groups in addressing the prevailing issue of rido in the province.
Before the conduct of the dialogue, the mechanism created a core group to consolidate data among them. This composed of the RRUC, Maguindanao Task Force Reconciliation and Unification (MTFRU), PNP Maguindanao, 6th Infantry Division (6ID) and the Tiyakap Kalilintad, Inc.
The commission looked forward that the dialogue would be helpful in attaining unity among Bangsamoro despite crisis they are currently experiencing. Likewise, the creation of coordinating mechanism for rido settlement in provincial level was expected to be the main output of the acticity. As proposed during the meeting, the dialogue will be held on July 27, 2017 at Buluan, Maguindanao. (RRUC Communications Division)
sa Biyernes, Hulyo 21, 2017