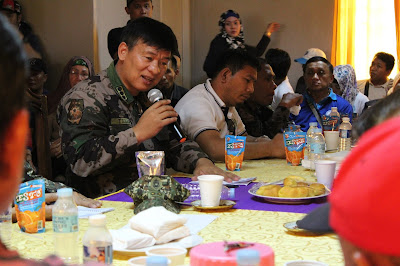 MAGUINDANAO – The Regional Reconciliation and Unification Commission of the Autonomous Region in Muslim Mindanao spearheaded the facilitative mediation over land dispute between Sinsuat and Parti clans on Monday, August 14, 2017 at the Municipal Hall, Datu Blah Sinsuat.
The mediation panel composed of the RRUC chairman Romeo K. Sema, the DBS mayor Raida Tomawis-Sinsuat and former mayor Marshall Sinsuat, vice-mayor Datu Tato Mustapha, Maguindanao Task Force Reconciliation and Unification deputy chair Abdulnasser Malingco.
PSSUPT Agustin Telco of PNP Maguindanao, Lt. Col. Jose Marie T. Sonte of Philippine Marines, and Coordinating Committee on Cessation of Hostilities both GPH and MILF also comprised the mediation panel.
The Parti clan was first to underwent dialogue with the panel. In the dialogue, the Parti clan, alleged claimant said they held Certificate of Title No. V16 of July 25, 1949 under the Commonwealth Act No. 141 covering 15 hectares, 27 acres and 43 centimeters but said it was forcedly acquired by the other party.
Sinsuat clan on the other hand stood firmly as the true owner of the said land even holding the authentic document of the land entitlement, but refused to show it for confidentiality purposes.
The mediation panel come up with a truce in a form of “status quo” signed by the both parties and the panel members as witnesses effective until the decision will be made on August 26, 2017 to be held in Cotabato City as continuation to the first dialogue conducted.
sa Miyerkules, Agosto 16, 2017