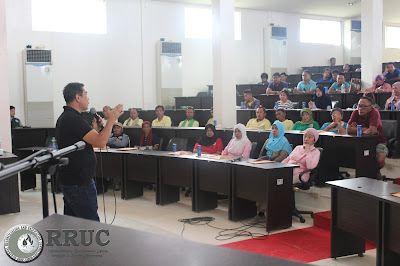 The Regional Reconciliation and Unification Commission of the Autonomous Region in Muslim Mindanao together with the Tumikang Sama-sama, Inc conducted Unity Dialogue in the province of Sulu on Tuesday, April 10, 2018.
The Unity Dialogue is one of the several efforts of the commission with its partner agencies to answer the issues of “pagbanta” (Tausug term for rido/ conflict) in the region.
Romeo K. Sema, chairman of RRUC said the region is facing challenges such as violent extremism and the issue of rido. The dialogue has been a significant platform to discuss unity and how it will impact to the resolution of rido.
Abdulbasit R. Benito, RRUC executive director presented the unresolved rido data in Sulu accounted by the commission including high profile cases.
TSS Executive Director Rosemain Abduraji classified rido with its likelihood to resume and the seriousness of the conflict where the likelihood to resume is manageable by the local communities while the seriousness of the conflict at any rate may occur, said Abduraji.
As discussed, the Department of Interior and Local Government Regional Office was suggested to issue an advisory to convene all municipal mayors in Sulu to consensually discuss “pagbanta” in the province.
Signing of ceasefire agreement among the parties involved with possible reoccurrence of conflict to keep peace and order in the community before the barangay elections start.
It was also recommended the creation of provincial mechanism on rido settlement.
Different sectors including the security both Armed Forces of the Philippines and the Provincial Police Office of Sulu have actively participated the dialogue.
###
sa Miyerkules, Abril 11, 2018